Retro One was released on xbox 360 ten years ago now, it was the 69th game to be released on the, then new, Xbox Indie Games scene for xbox 360.
When we found out about this new format to release games we jumped straight onto it. We worked very hard EVERY night for exactly 30 days straight.
Retro One was born.
To celebrate the ten year anniversary, we have decided to release Retro 10. Again following the format of the original game, we have spend just a few months making this game.
So here it is, Retro 10...

Not quite the 30 days from the last one, but you know, we`re a-bit older and slower now-a-days.  Also this is our first ever mobile game release!  Shocking I know!!

A simple format game, shoot everything that comes at you. Survive as long as you can and get a high-score. 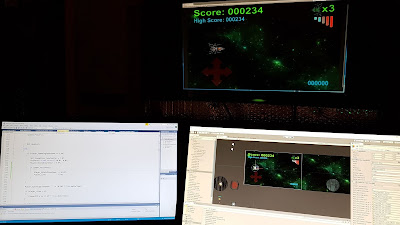 Posted by RetroCoders at 11:53 No comments: